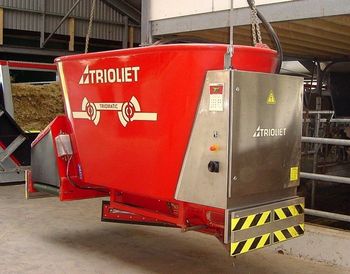 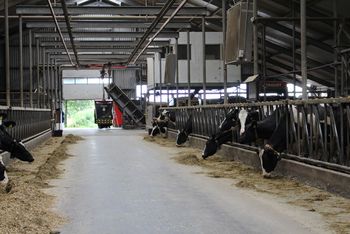 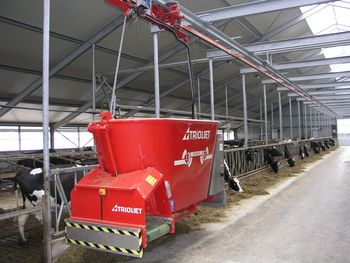 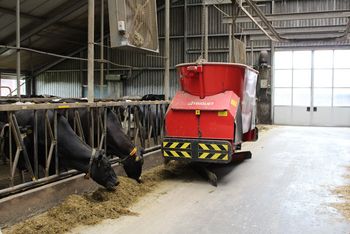 "It's possible to feed multiple groups, several times a day. That is an important factor. The better you can treat the dry cows, the better they deliver and the less problems you get later on."

Sitting round the kitchen table, Henry Petter tells us proudly about the figures that his business partner Herman showed people at a meeting of their study club. "They were so amazed, they could barely believe it. You should have seen them. Herman told them the feed rations and the milk yield. 'That much yield with so little feed?', they asked in amazement."

The business produces an average of 9,500 kg of milk per cow per year, with 4.34% fat and 3.5% protein and a BSK (business standard cow) of 47.8. The feed efficiency number is between 1.55 and 1.57, while the average feed efficiency in Western Europe is 1.30. So a good number. "We are currently feeding 21.9 kg of concentrate per cow per day. We can do this because we are feeding each group twelve times per day. That is possible thanks to the automatic feeding system", explains Henry Petter.

"That much yield with so little feed?"

The Petter business partnership now has fourteen years' experience with using the Triomatic automatic feeding system. Henry Petter is one of the dairy farmers who was in from the outset, the development of the first Triomatic automatic feeding system. It was he who explained to us what he wanted, as a pioneer, and fed back his reactions to the Trioliet development team. Although he had no interest in a milking robot (the reason being: "I want to see my cows twice a day"), he saw many benefits in automated feeding. In the meantime, the benefits have turned out to be greater than he expected. Henry: "It has done more for us than we could ever have imagined. In particular, the flexibility in setting the timing is a major plus. We can now plan a few days ahead, without having to come back and check on it. And we can now make the silage ourselves instead of outsourcing it like we used to. In addition, there is now no hierarchy in the group, because there is always fresh feed available and the fixed feeding times and the high frequency of feeding is important. This means the cows are more relaxed. The calves do better than average in with the flock."

Not more, but better

The dairy farm managed by Herman van Dijk, Henry Petter and his son, Arie, owns 250 dairy cows. The benefit of the automatic feeding system is that it can be controlled with an accuracy of two decimal places, which means you can get the best returns. Henry:  "The high level of feed efficiency is of course due to a number of different factors. It is not just a question of feeding, but the whole range of costs. We try to be self-sufficient in terms of raw feeds, and we buy less phosphate-rich products. That way we can also reduce the quantity of phosphate that needs to be disposed of. This allows you to work with a high level of accuracy and you get a high yield from the way you run your whole business. We try to do not more, but better. The automatic feeding system means that you have flexibility."

Previously, we spent two hours a day feeding, or around fourteen hours a week. "Right now, feeding only takes us about 4.5 hours per week. About 80 tonnes of raw feed is handled each week, and about 15 kg of left-over feed. What's more, it is also possible to feed multiple groups, several times a day, so they always have fresh feed. Even preparing a small ration for three dry cows is possible. That is an important factor. The better you can treat the dry cows, the better they deliver and the less problems you get later on. At this level, the automatic feeding system is definitely competitive compared to paying someone because we now feed the dry cows twice a day instead of once every other day. That is what is best for the animals. But it is not only the cows who benefit from this. I have some hobbies myself, and now I can find some free time for them. That is also important, of course", says Henry with a laugh.

We can go out

The times for the feed rounds can be moved if necessary. For example, in hot weather it is useful to be able to change the feeding rounds. Herman van Dijk: "We feed more often at night during the summer. With the night-time feeding rounds the system uses the night electricity rate, so that is an added benefit. Personally, I find the flexibility really good and it soon pays for itself." Arie Petter adds: "The biggest benefit for me is that I have more free time. You have the freedom to go out, you no longer need to live by the clock. None of us even wear a watch any more. That says plenty," Arie laughs.

The dairy farm is depreciating the investment in the automatic feeding system over twenty years. "The investment for the Triomatic T40 automatic feeding system was around EUR 200,000. We are now halfway through this and the system can easily run for another ten years. In terms of maintenance, we have had to buy a new set of knives now and again. But if you compare that to the diesel costs of a feeder vehicle or tractor, then it comes out well." They do not deny that it is a major investment. Henry: "We are using it to feed 250 cows. You need to look at the big picture. What do you put in and what do you get out? You have to look below the line, that is what matters. With a cost price of 0.5 cents per litre of milk (maintenance costs, depreciation and a quota of 2.5 million litres of milk), we are doing really well. As a farmer with livestock, you need to be able to think and act long term."